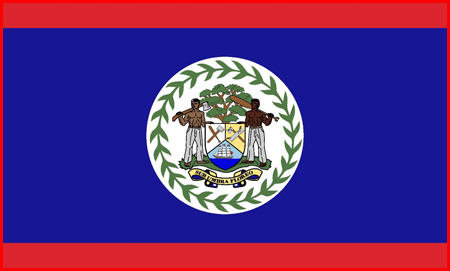 As we draw nearer to our celebration month, which includes a multitude of festivities to celebrate our Independence, the Battle of St. George’s Caye, and other patriotic and historic events, it is expected that we’ll see thousands of Belizean flags flying high and low. Often times in the past, though, there have been several versions of the flags which differ in proportions, contents, shading of the men on the flags, hues, and other aspects. It is almost as if there was no ONE flag of Belize and rather just versions that varied per store, printer, distributor, or producer. In an effort to have one standardized flag which represents Belize, a group of persons have met over time to finally determine the standards of the flag which proudly represent our Caribbean-Central American jewel.
A Flag Day Presentation to detail the new standardization of the flag was held on Wednesday, August 28, 2019 by the National Celebrations Commission (NCC). There, Nigel Encalada, Director of the Institute for Social and Cultural Research, gave those details. According to Encalada, it has been an ongoing process which has used the knowledge and skills of the NCC, National Institute of Culture and History (NICH), and other personnel to research at the archives and libraries on a national level. Their research even got them as far as London and Jamaica.
The modern flag that we are now familiar with was first hoisted in 1981, the year of our independence. It was designed by two public officers at the time, Everal Waight, Public Secretary, and Inez Sanchez, Chief Education Officer after a plea was made to make the initial flag a more unifying symbol. Prior to our independence, the People’s United Party (PUP) proposed a blue flag with the Coat of Arms in a white circle. Because of the close association of the flag with the PUP, public opinion was divided as to its suitability to act as a unifying symbol. The United Democratic Party (UDP) did not propose a flag, but called for a flag that could rally all citizens, regardless of their political affiliation. As a consequence, the government of the time appointed a bi-partisan National Symbols Committee that launched a competition and invited citizens to submit designs for a National Flag. It is the Waight-Sanchez design, called the “Flag of Unity” that fulfilled that criteria and was selected.
It is with reference to that flag that the new flag, 2019’s, was updated and now standardized. Encalada says that the NCC proposed a paper to Cabinet asking permission to standardize the flag, its color scheme, protocol, and to develop a statutory instrument (SI), which will be drafted by the Office of the Attorney General. Before they were given the go-ahead, they were asked to consult with the Leader of the Opposition and to ensure that the new flag reflects the 1981 flag’s color scheme.
Adhering to those conditions, the team was underway. At a glance, the new flag looks exactly the same as the 1981 version, but as Encalada explains, there were subtle changes made. For example, the two men which stand on either side of the coat of arms and are surrounded by the wreath have been drawn to be more anatomically accurate. The men on the previous version were drawn in a “caricature style”. The men now also have realistic skin tones which, like all other colors on the flag, now have particular codes, which printers can refer to to achieve a true-color flag.
Although this new standard of the flag is not yet law, there are strides being made in that direction, but Encalada says that distributors and holders of the current versions of the flag are being given a six-month period to sell those flags.
The mayor or mayor representative from each municipality were each at the presentation and were given a new standard flag, presented to them by Chair of the NCC and Deputy Prime Minister, Hon. Patrick Faber. Encalada encouraged each mayor and mayor representative to integrate the new flag into their municipality and to educate their city or town people on the updates made on the flag.
September 1 is nationally regarded as National Flag Day in Belize and the person who is responsible for the inception of this day, Captain Nicolas Sanchez, who currently lives in Canada, was honored at the presentation. He was the first person to, of his own will and monies, purchase around twenty flags and hoisted them by himself at the flag monument on Freetown Road. It was after some time that he was joined by the Belize Boy Scouts in his efforts.