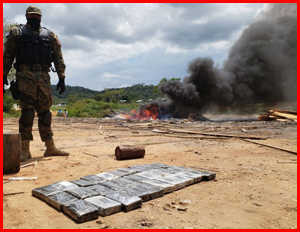 At a few minutes before 10 on Wednesday morning, a convoy of heavily armed police and military personnel left Belize City enroute to an undisclosed location where a total of 1,330 kilos of cocaine were to be destroyed. Packed inside a cargo truck the drugs were moved to the location where random tests were done on the packages before they were thrown into a blazing fire.
Before the convoy had arrived at the destination, a large pickup truck had attempted to overtake the convoy on a couple of occasions making the officers in the convoy nervous. The menacing-looking pickup bore Orange Walk license plates and the occupants inside could not be identified as it was heavily tinted. Just before the convoy reached its destination, the pickup truck again attempted to overtake the convoy; this time the officers responded quickly, stopping the pickup truck and surrounding it, assault rifles at the ready. The driver and passenger of the truck were quickly pulled out with the driver being forced to the pavement. He would later be identified as Mike Menjiva, the proprietor of La Cabaña Night Club in Belmopan. The other passenger and the vehicle were searched and they were let go.
It was over 60 million dollars’ worth of cocaine that the officers were zealously guarding and Assistant Commissioner of Police, Marco Vidal, told the press that the officer did what they had to do to ensure their safety and integrity of the cargo.
At the site, a bonfire was lit and officers of the court, justices of the peace and police officers all ensured that proper testing was being done and that all the parcels of compressed cocaine were accounted for and destroyed by fire. Vidal explained that all the mechanisms had been put in place to ensure transparency and accountability.
Shortly after midnight on September 10th, an airplane landed on a private airstrip in the area of La Democracia Village in the Belize District. Officers who were on the ground were awaiting the landing and as soon as it touched down, they moved in to intercept the plane and its cargo. After a short firefight, the officers were able to detain the plan and its cargo. six men were also detained on the scene and an additional two were detained thereafter.
It is a major bust for police as normally police arrive on the scene to only discover airplanes that are either abandoned and or lit on fire.