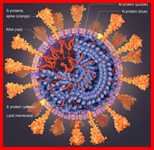 The virus that causes COVID-19 is a formidable foe. By tracing its tracks and behavior inside the human body cell machinery, we can ultimately interrupt its replication. Now known as SARS-CoV-2, scientists are now mustering every specialized branch of the sciences to understand its sleuth.
Thousands of different coronaviruses may inhabit the planet. Four of them are responsible for many of our common colds. Two others have already triggered alarming outbreaks of disease: in 2002 a coronavirus caused severe acute respiratory syndrome (SARS), which killed more than 770 people worldwide, and in 2012 a different strain started Middle East respiratory syndrome (MERS), taking more than 800 lives. SARS burned out within a year; MERS still lingers.
The newest coronavirus, SARS-CoV-2, has created a far deadlier pandemic in part because once it infects a person it can lie undetected for a long time. An individual who had the SARS coronavirus did not transmit it until 24 to 36 hours after displaying symptoms such as fever and dry cough; people feeling ill could be isolated before they made others sick. But people with COVID-19 can transmit the virus before they show clear symptoms. Not feeling ill, infected men and women work, commute, shop, eat out and attend parties, all the while exhaling coronavirus into the airspace of people around them. The virus can remain undetected inside the human body for so long partly because its genome produces proteins that delay our immune system from sounding an alarm. Meanwhile lung cells die as the virus secretly reproduces. When the immune system does hear the call, it can go into overdrive, suffocating the very cells it is trying to save.
A SARS-CoV-2 particle enters a person’s nose or mouth and floats in the airway until it brushes against a lung cell that has an ACE2 receptor on the surface. The virus binds to that cell, slips inside and uses the cell’s machinery to help make copies of itself. They break out, leaving the cell for dead, and penetrate other cells. Infected cells send out alarms to the immune system to try to neutralize or destroy the pathogens, but the viruses can prevent or intercept the signals, buying time to replicate widely before a person shows symptoms.
The SARS-CoV-2 genome is a strand of RNA that is about 29,900 bases long—near the limit for RNA viruses. Influenza has about 13,500 bases, and the rhinoviruses that cause common colds have about 8,000. (A base is a pair of compounds that are the building blocks of RNA and DNA.) Because the genome is so large, many mutations could occur during replication that would cripple the virus, but SARS-CoV-2 can proofread and correct copies. This quality control is common in human cells and in DNA viruses but highly unusual in RNA viruses. The long genome also has accessory genes, not fully understood, some of which may help it fend off our immune system.
Because the SARS-CoV-2 genome is so long, it can encode a huge amount of information, enabling the novel coronavirus to create more proteins and carry out more sophisticated replication strategies than other RNA viruses. Amazingly, for its tiny size, one of these advantageous proteins is an enzyme called exonuclease, which helps the virus proofread and correct copies as they are made. Only viruses with genomes longer than about 20,000 bases make this enzyme.
Commercial and university labs are investigating well over 100 drugs to fight COVID-19, the disease that the SARS-CoV-2 virus causes. Most drugs would not destroy the virus directly but would interfere with it enough to allow the body’s immune system to clear the infection.
Antiviral drugs generally stop a virus from attaching to a lung cell, prevent a virus from reproducing if it does invade a cell, or dampen an overreaction by the immune system, which can cause severe symptoms in infected people. Vaccines prepare the immune system to quickly and effectively fight a future infection.
Immune cells can destroy too many lung cells creating enough mucus like waste to suffocate the lungs, forcing victims onto ventilators. Overproduction of an alarm protein, or cytokine, such as interleukin-6 can put the immune cells into overdrive.
Any drug that will prevent the human immune system from overreacting as a result of COVID-19 will be helpful.
A cheap and widely used steroid called dexamethasone has become the first drug shown to be able to save the lives of COVID-19 patients in what scientists said is a “major breakthrough” in the coronavirus pandemic.
Trial results announced last week showed dexamethasone, which is used to reduce inflammation in other diseases such as arthritis, reduced death rates by around a third among the most severely ill COVID-19 patients admitted to hospital.
The preliminary results, which have not been peer-reviewed, suggest the drug should immediately become standard care in patients with severe cases of the pandemic disease, said the researchers who led the trials.
Dexamethasone is currently on the U.S. Food and Drug Administration’s list of drugs in shortage. Still several suppliers including one of the largest – Germany’s Fresenius – say they have the drug on the hand.
As we have learned, a tiny piece of genetic code is able to surmount a sophisticated attack on the human body. However, progress is now being made to counteract the virus that causes COVID-19.