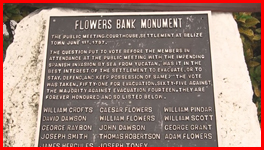 A short ceremony to pay tribute to the “Flowers Bank Fourteen” was held in the Village at the Flowers Bank 14 Monument on Monday, June 1. There, members of the Village Council, the Institute for Social and Cultural Research, Emergent Corp, and from the community paid their respects to the men who decided to stay and defend the land and country we call Belize. This was more than 223 years ago when settlers received information of an impending attack from Spanish forces via the Yucatan. The attack would eventually take place on September 10, 1798, better known as the Battle of St. George’s Caye.
A public meeting was called in Belize Town on June 1, 1797 for the settlers to make a decision to stay and defend Belize or to evacuate. Archives show that votes were fifty-one to sixty-five, with the majority voting to stay and defend the land. From that majority, fourteen were residents from the Belize River Valley. They were William Crofts, David Dawson, George Raybon, Joseph Smith, James Hercules, Caesar Flowers, William Flowers, John Dawson, Thomas Robertson, Joseph Toney, William Pindar, William Scott, George Grant, and Adam Flowers. Of the group, twelve were free blacks while Raybon and Robertson were white men.
Since 2009, the annual Flowers Bank Village Festival commemorates this important historic event and the pivotal role of the fourteen men, dubbed the “Flowers Bank 14”. Given the current pandemic, this year’s festivities were canceled.