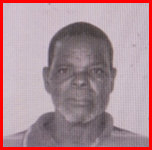 On Sunday, June 7, Joseph Emmanuel Brown or Joseph Panting better know as ‘Brutus’, passed away. He was the Sergeant-at-Arms for the People’s United Party between 1998 to 2008. And while he held a position in the front and center of the PUP, he died alone and uncared for.
His brother, Glenford Davis noted that Brutus was always at the frontline of the PUP; he did what others would never ever do and yet at the time of his greatest need, the PUP failed him. Davis explained that he had tried to get in touch with many within the leadership of the PUP but none answered. While Brutus was ailing, he was abandoned. At the time of his funeral, there was not a single PUP representative at his funeral.
The cold and uncaring manner in which Brutus was treated when he most needed them is most symbolic of who the members of the PUP really are. They use the people and when they need them the most they just abandon them, forget about them.