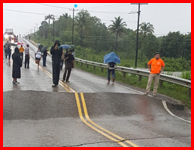 Commuters to and from western Belize were halted in their tracks when they approached Mile 38 1/2 on the George Price Highway on Thursday morning. Incessant rains and flood waters the night before caused a culvert on the road to collapse and the highway itself to become damaged, making it impassable. The isolation of the western and southern parts of the country via this route was quickly restored, at least temporarily.
Just some hours after the culvert caved in, by 10:00 that night, works to temporarily fix the highway were completed. Workmen from the Ministry of Works and the National Emergency Management Organization (NEMO) toiled quite some time to use boulders and other backfill material to repair the damages. Vehicles and other forms of transport can now cross the culvert and the temporary repairs will have to do until a permanent bridge is built.

Experts say that what caused the culvert to cave in is the age of these structures, having been built some thirty or forty years ago. Since then, their hydraulic capacities have been greatly compromised and weakened, and the progress from land clearing in the area have made the jobs on the infrastructure even more burdensome. More culverts and proper drainage are among the necessities that workmen must work on to make a lasting repair to the road and its infrastructure and to improve its climate resilience.