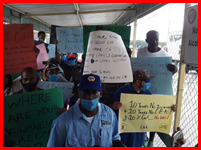 Business at the Port of Belize (PBL) has come to a stop for an entire week now and there is no telling when operations will resume. The Port has proposed that the workers and management enter into mediation but they suggest that the capacity does not exist in country. Meanwhile, the workers maintain that the mediator needs to be the Labor Department. That has caused for both parties to not see eye-to-eye. As both of these entities remain deadlocked, the Belize Chamber of Commerce and Industry (BCCI) has weighed in stating that the lack of activity will cause even greater economic problems compounding the COVID-19 economic strain.
However, CWU president, Even ‘Mose’ Hyde is insistent that even before mediation, the Collective Bargaining Agreement (CBA) between the Port and its workers needs to be settled. He notes that there are only a couple of points that need to be finalized to make the CBA whole. He added that it is just a matter of a few hours of effort for it to be complete.
Commenting on the situation on Wednesday was Prime Minister, Rt. Hon. Dean Barrow. He explained that, “this stalemate cannot continue.” He said that if ships cannot be offloaded, “the chokehold, the stranglehold that is being exercised on the economy of this country, on the wellbeing of the citizenry of this country, is not something that any government can contemplate with any kind of indifference.” He added that the government through the Minister of Labor is continuing to press both sides to negotiations. He concluded stating that, “every effort has to be made for both sides to come to an understanding. If that proves to be impossible government reserves the right to protect commerce.”