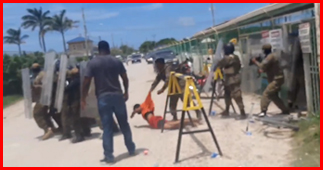 Commissioner of the Belize Police Department (BPD) Chester Williams says that he is in the process of determining what caused tensions to rise at the Port of Belize Limited (PBL) on Wednesday morning. There, members of the Christian Workers Union (CWU) were in discussions with the Ministry of Labor and the PBL for a peaceful, non-violent demonstration against PBL actions. CWU President, Evan ‘Mose’ Hyde, explained that he and the COMPOL had already come to an agreement that this protest would be uneventful and non-violent. For a while, that is exactly how it went as ordinary uniformed police officers simply showed their presence to maintain order. That was soon outdone by members of the Gang Suppression Unit (GSU) and other riot squads of the BPD who eventually showed up and things got out of hand.
Employees of the PBL, including union members of the CWU, and other surrounding persons were attacked by rubber bullets and teargas. It is not sure what caused these unnecessary actions to be unleashed on the crowds but this is exactly what COMPOL Williams is trying to determine. Throughout the course of the day, he maintained communications with ACP Alden Dawson, who explained that he was doing everything possible to get a handle on the situation. COMPOL Williams directed that members of the GSU be immediately removed from the area but by then, the damage was already done. In a briefing with the media, the COMPOL expressed his disappointment with the militant actions taken by some of the officers, especially since they added to an already volatile and agitated situation. He continued to say that to send a strong message, certain elements of the GSU have already been transferred.
Minister of National Security, Hon. Sen. Michael Peyrefitte says that ‘the State’, did not sanction the violence unleashed on the port workers. He said that it was unthinkable that on one hand the government would be seeking an injunction against the Port from firing workers and on the other hand sanction the use of force against those very workers. He added that, “we would never rough up stevedores on behalf of the vampire Michael Ashcroft.” He was stern saying that officers would be charged for not following specific instructions not to use violence against the Port workers.
Stevedores at the PBL remain in solidarity with other employees of the port, some 36, who were terminated. This prompted a cessation of operations at the port for the day with employees demonstrating with placards and other signs. Furthermore, a passenger bus was laid across the entrance of the port but was later moved. All this was prior to the riot-like situation involving civilians and police officers alike.