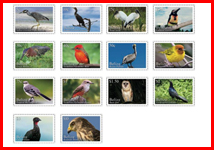 The Belize Postal Service has released a new set of Definitive Postage Stamps entitled “Resident Birds of Belize”. The fourteen stamps, ranging from. $0.05 to $10.00, were officially released on Wednesday, July 29, 2020. These will replace the previous definitive set entitled “Belize Destinations—Ecological and Cultural Heritage Sites” initially released on August 31, 2005.
The new set features birds that are resident to Belize, as the theme implies, and consist of 14 such birds depicted on 14 different stamps. Very important to note is that this new release also includes two new values: a 40¢ and a $1.50 stamp. These two new values are primarily to facilitate customers mailing postcards to Europe and to fulfill the requirement for “Declaration Forms”, respectively.
Images for these stamps were provided by the Belize Audubon Society and were designed by CASCO Philatelic in the United Kingdom. The printing was done by “The Lowe’s Martin Group” also of the United Kingdom. This new set of 14 stamps and First Day Covers go on sale effective Wednesday, July 29, 2020 and can be purchased at post offices countrywide. This date also sees the withdrawal of all other definitive stamps from the Post Office.