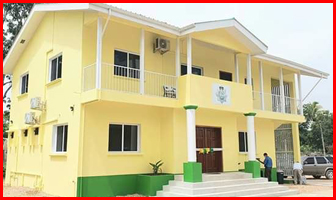 Crime in the Roaring Creek community in western Belize has been almost always quite high. These undoubtedly put a strain on police resources but on Wednesday, June 24, 2020, a new police substation was inaugurated in the village. This will help to make police presence in the area more permanent and lasting, and can hopefully deter crime in the community. An increased can also pacify the minds of the villagers, and certainly, that is exactly what ASP Denroy Barrow, who will head this police presence police station, must hope for. Furthermore, these are just the sentiments, which Commissioner of Police (COMPOL) Chester Williams shared. He says that this new building now makes a “great addition” to Belize Police Department facilities and will function to serve as many as fourteen villages in western Belize.
The $475,592.72 building was built in record time, in nine months, even under the strain of the State of Emergency brought on by COVID-19. It was built under the George Price Rehabilitation Project and has replaced an older police station which was vulnerable to flooding and other disasters. The new building features a Crimes Investigation Branch (CIB), Special Branch, and Domestic Violence and Community Policing units. This, COMPOL Williams says, allows villagers to have access to expanded services without having to travel all the way to Belmopan. The facility has been made bigger when compared to the old building to make space for the 36 officers attached to the Roaring Creek community and an investigator who will now work from there. These will help to contain an already significantly reducing crime pattern in the area. It also now includes more amenities such as holding cells, a kitchen area, bathrooms, and greater parking areas for the public.
At the inauguration of the police station, Attorney General and Minister of National Security, Hon. Sen. Michael Peyrefitte, explained that the decentralized nature of the new police station will hopefully serve as a model of policing in the country.
At the opening ceremony, Peyrefitte was joined by Commissioner of Police Chester Williams and Errol Gentle, CEO in the Ministry of Works, Transport, and NEMO. The new building was blessed by Pastor Richard Smith and CEO Gentle officially handed over the keys to the new building to Hon. Sen. Peyrefitte and COMPOL Williams.