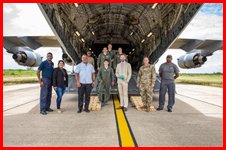 The country’s National Fire Service is working to pilot its very own Emergency Medical Technician (EMT) services in western Belize and in assisting with that effort, the United States Government donated two ambulances. They were handed over on Friday, June 19 to the Belize Fire Department in San Ignacio and Santa Elena, Cayo by the Virginia Emergency Services Program. The ambulances, a Ford E-350 and an International 4300, were delivered onboard a C-17 military aircraft from the Charleston Air Force Base and after arriving into the country, were immediately handed over to Fire Chief Collin Gillett by Keith Gilges, U.S. Chargé d’Affaires.

Fire Chief Gillett says that the donation of the ambulances will greatly improve the Fire Department’s capabilities in response to emergency situations. The Department managed to obtain the ambulances through the work of Archibald McFarlane from Belize Heroes. This group works in sourcing items for the Department and it was through their efforts, which started in August 2019 that the companies in Virginia donated the ambulances.
Besides the donation of the ambulances, there will also be training made available to fourteen firefighters in EMT services. This will take place once the airports reopen, at which time persons from Belize Heroes will travel in country to conduct the training. This will expand the department’s competences, especially when responding to road traffic accidents. Previously, they would only be able to respond to these accidents in their fire trucks, proving inefficient and not entirely effective in their rescue. Chargé Gilges says that it is in this effort, providing improved access to life-saving medical care, that the US Government remains committed to Belize. Facing a multitude of dangers, such as natural disasters, the COVID-19 pandemic, and other emergencies, the difference between life and death can be the length of time a medical team takes to respond to the emergency. “These two new ambulances will help expand access to critical health resources for tens of thousands of people in Western Belize, saving lives in the process,” he said. The new ambulances will improve the Government of Belize’s natural disaster response capabilities, particularly its ability to provide timely public health and disaster relief. There are currently no pre-hospital emergency services available in the twin towns of San Ignacio and Santa Elena. The new ambulances will provide residents with access to lifesaving medical care, benefiting more than 20,000 residents and visitors in the twin towns of Santa Elena and San Ignacio.