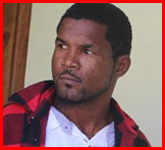 A resident of Conch Shell Bay in Belize City had his charge of murder reduced to manslaughter on Monday June 22. Shane Jones who had been arrested and charged for murder in the killing of 49-year-old Edwin Usher, saw the charge reduced. Upon appearing in court on Monday, Jones was granted bail and his case was adjourned until July 10.
Jones had been charged after he severely beat Usher in front of a restaurant at the corner of Vernon and Woods Streets. The beating was so severe that it landed Usher in the hospital where he died a few days later.