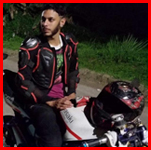 A young man is dead following a traffic accident on the much-traversed La Loma Luz Boulevard in Santa Elena Town in Cayo shortly before midday on Monday. Kemel Espat was on his much-loved motorcycle, driving at considerable speed, and in trying to avoid a parked vehicle, crashed into a concrete post.
Witnesses say that when Espat collided with the post his motorcycle also flipped.
Espat’s father, Francisco Javier Espat, has been greatly saddened by his son’s death. The last time he saw Kemel was on Monday morning when he reported that he was taking his girlfriend to work.