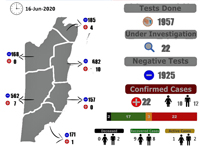 After around eight weeks without reporting a positive case of COVID-19 in Belize, the Ministry of Health had announced two new cases in a matter of days. Not even a week after the two newest cases were announced, two more positive cases were reported by the MOH, bringing the national total to 22.
This 21st case was confirmed after samples were taken from persons arriving in country on a flight from Texas, USA as a part of the repatriation exercise. He was in Houston, Texas and was among 22 persons who were approved to enter the country on June 12. Since then, he has been placed in mandatory quarantine and Dr. Marvin Manzanero, Director of Health Services, says that he will remain in strict quarantine at the Ramada Hotel for the mandatory period of 14-days after which a new sample will be taken and processed. Of the twelve, seven arrived via Belize’s northern border with Mexico and the remainder, including three American nationals, came through the Philip Goldson International Airport.
Case #22 was announced on Tuesday, June 16 after another forty-five samples for SARS-CoV2 were taken and processed. This positive case is that of a male person caught entering Belize illegally over the weekend and who was swabbed as part of MOH’s established protocol. He was found illegally entering in the Cayo District in western Belize; contact tracing for this particular case is currently underway. MOH reminds the public that it continues its heightened surveillance across the country and underscores the prompt detection and reporting of illegal crossings. This is the second positive detected case of COVID-19, which was imported due to illegal crossings and the MOH advises that reporting these crossings will prove vital in being able to contain a potential outbreak of the viral disease.
While the country’s total number of cases stands at twenty-two, we have so far had seventeen recoveries. Sample tests for patient #19, the case detected from a repatriated Belizean who was onboard a cruise ship, have now rendered a second negative result. He is now considered recovered and has been released from quarantine.