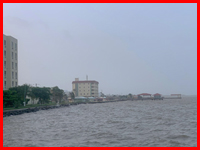 When we woke up on Tuesday, our normally blue and sunny sky was tinged with hues of brown and darker than normal. What looks like fog covering the country is actually dust particles which have made their way from the Saharan Desert in northern African and traveled across the Atlantic Ocean. It is an annual event when millions of tons of these sand particles would travel toward the Caribbean and USA but this year, the phenomenon is more extreme. Some sources say that it is the most significant showing of the event since the last half century and is vivid and prominent in satellite images from space.
We are just a few days into the experience which is said to continue on into at least the next week. Besides affecting visibility, the dust fog also poses serious health conditions. Persons with respiratory illnesses and allergies are especially being affected and are warned to stay hydrated.
The silver lining in all this, however, is that it reportedly suppresses the formation of tropical storms. Dust in the air creates a significantly drier air layer, and hurricanes need moist conditions to develop and strengthen. It also creates stable air mass and a string vertical wind shear, both factors that tend to suppress the development of tropical storms and hurricanes.