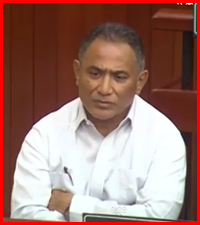 The Guardian Newspaper was provided with a sheaf of documents that proves that Johnny Briceno and his family may be among the largest landholders in the country. The revelation first came to light during the Budget debate during which Prime Minister, Rt. Hon. Dean Barrow refuted Briceno’s claim that the UDP was the most corrupt government. To prove this the PM pulled out a number of documents and pulled no punches when he exposed both Briceno and Julius Espat as being among the largest land holders in the country. While the PM enumerated the large masses of land which the duo own, Briceno hung his head in shame while Espat had a half-hearted defense.

The documents prove that between Johnny Briceno and his family members they own over 3,259.833 acres of land in Tower Hill alone. That’s an area twice the size of Orange Walk town! And the tenure is over a combination of the same players mixed and matched to own land.

Another combination of Briceno’s with senior land tenure is that of Leopoldo Briceno, Eligio E. Briceno, Eudaldo S. Briceno and Graciano Briceno who hold 86.9 acres of land in the Tower Hill registration section block 4 parcel 267.

Yet another combination sees Eligio Briceno, Eudaldo Briceno, and Graciano Briceno owning land in Tower Hill amounting to 526.533 acres for which they paid 1,575 for a 30 year tenure.

Brothers Jaime and John Briceno own .961 hectares in Orange Walk; 7.499 acres in Tower Hill and 5.84 acres in Progresso which has since been transferred to Scott Erik Mader. They also hold a Minister’s fiat grant for 5.84 acres of land along the west side of Progresso Lagoon, Progresso Agricultural Layout in  Corozal which is at plan 21 of 1999 for which 240 dollars and 76 cents were paid.

Singly, Johnny owns 827.848 square yards in Belmopan, holds lease to 20 acres in Progresso, another 6 acres on the Progresso Lagoon and has as free hold 20 acres at Big Pond on the New River.

The breakdown of land tenure is not limited to the Briceno family however as close associate to the Briceno’s, Neri Ramirez is also quite a holder of land. Documents we received show that he holds 49.94 acres of land along the Southern Lagoon and North of Gales Point Village which he paid for in 2007 a paltry $4,869.15. This transaction being approved by Johnny Briceno.

And the land tenure also extends to companies, Jaime Briceno and Neri Briceno who own Xcanha development company limited were given permission to survey an area at Miller’s Bight in the Orange Walk district on September 6, 2004. Under Instrument number 3613/2005 dated 10th May, 2005 Block 4 parcel 250, Johnny Briceno as Minister of Natural Resources allowed the transfer of 13,750 acres to Xcanha Development company.

Renan Briceno does not fall behind, he holds Block 1-  1.042 acres of land along the sea coast and approximately ¾ mile north of the channel know as the split, Caye Caulker Village Belize District plan no 566 of 2007. He paid 6 thousand dollars for this parcel and Johnny approved it. He held an additional 5.75 acres of land at the same location for which he paid 15 thousand four hundred dollars on 14th January 2005.

Mr. Pac-Man the champion of transparency and accountability is not to be left behind. The records we have shows that he holds land in St. George’s Caye – 1,709.125 square meters—- this is caye land.  More caye land he holds include 3 parcels of .42 acres which are portions of 5.331 acres. That land also saw 2 parcels at .46 acres each going to Espat with another parcel for .47 acres at the south of St. George’s Caye near the split held by Espat.

But there is more, Espat holds 10 acres on the West-side of the Western Highway; He also holds an additional 1,888.322 square meters in the Albert/Mesop registration section and 2,230 square meters which was transferred by Abrazos limited to Julius Espat. And there is more, 350.08 square yards in St. Martin de Porres transferred by Earl Tucker to Julius Espat. Espat has since claimed that the Caye land is one parcel of land which was subdivided and that the other parcels of land he acquired through private transactions.

Other large land holders are Juan Marin and Florencio Marin Jr. who own land at the Young Gal/MCRAE block 19 parcel 820 at 1,420.169 acres

It’s quite a lot to digest and proves that when the PUP were in power they spared no conscience to enrich themselves via land tenure. All the while Johnny Briceno knowing!