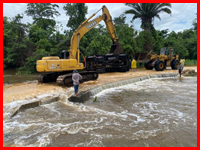 Belizeans are being urged to be prepared, stay safe and heed to all advice and warnings coming from the National Meteorological Service and National Emergency Management Organization during the 2020 Hurricane Season. The first jolt came over the weekend with a downpour.
Deputy Chief Meteorologist at the National Meteorological Service, Ronald Gordon saysthat residents particularly in the west were most affected by heavy rainfall over the weekend. There were flooding primarily in the Belmopan Area at first and also along the George Price Highway.
This was as a result of a number two tropical depression of the Pacific season. Later on, early Sunday morning that system strengthened to tropical storm Amanda and eventually crossed over El Salvador and Guatemala. It eventually dissipated over the mountains of Guatemala.
With the downpour, came an advice from the Belmopan City Council for residents of the J & W area not to cross the bridge until the water levels would go down. The Ministry of Health had also responded by reminding the public to stay safe, including making drinking water safe.
Practice safe sanitation and hygiene to reduce the incidences of common waterborne diseases that are characterized by diarrhea and vomiting. Seek medical attention if your symptoms become worse.
Mayor Khalid Belisle had activated two backhoes over the last few days to dig extra drains in an attempt to dissipate the abundance of surface water. Mayor Belisle is particularly perturbed by some land owners purposefully blocking drains and culverts in an attempt to access their properties.
A timely release from the National Meteorological Service of Belize notes that Monday 1st June marks the beginning of the 2020 hurricane season for the Atlantic Basin. The season runs from 1st June to 30th November each year. However, the formation of tropical cyclones is possible at any time of the year, as shown by the formation of tropical storm Arthur on May 16 and tropical storm Bertha on May 27. The formation of these systems marks the sixth consecutive year a storm has developed before the official start of the season.
The 2020 forecast is suggesting that tropical cyclone activity will be above normal in the Atlantic Basin (North Atlantic Ocean, Caribbean Sea and the Gulf of Mexico). The prediction is for there to be thirteen to nineteen (13 to 19) named storms, of those six to ten (6 to 10) are expected to become hurricanes and three to six (3 to 6) are expected to become major hurricanes (Category 3 or stronger). An average season in the Atlantic Basin consists of twelve (12) named storms, six (6) hurricanes and two (2) major hurricanes.