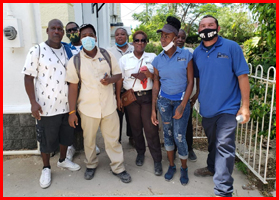 The Attorney General, on behalf of the Labor Commissioner filed an application for an injunction to stop the Port of Belize from firing 36 of its employees, 29 of them being members of the Christian Worker’s Union (CWU). The matter was heard at 2:00 on Wednesday, July 22 before Justice Sonya Young. Representing the Port of Belize was Senior Counsel, Godfrey Smith, while the Labor Commissioner was represented by attorney Keileru Awich. Also present in court was attorney Anthony Sylvester, who asked to be added as an interested party as the application affected the members of the CWU, which he represents. He noted that he would not add any arguments to the proceedings, however.
On making his presentations, Awich noted that in addition to an injunction and anticipating that the workers would be fired before the matter was heard, they also sought an order to compel the respondents to reinstate the workers if they were fired. The injunction being sought was for 28 days while the matter is negotiated on.
In making his presentation, Awich stated that the termination of the employees was done without consultation. For his part, Smith stated that “the ship had sailed” and that the employees had already received their benefits paid to them electronically.
At the end of the arguments, Justice Young stated that she will give her decision on Friday, July 24.
In a release from the Attorney General it states that, “The PBL and CWU are in a labour dispute in relation to the implementation of a 10% salary reduction by the PBL. This has been sent to the Essential Services Arbitration Tribunal for its consideration beginning tomorrow.
In a separate matter, in an email dated Sunday, July 12th, 2020, the PBL informed the Labour Department and the CWU of the company’s impending redundancies and requested a tri-partite meeting of the CWU, PBL and the Ministry of Labour to discuss the matter. On that same day, the Labour Commissioner responded to PBL advising that the company should follow the redundancy process outlined in the Collective Agreement, and in the absence of such a process in the Agreement, there should be strict compliance with the requirements outlined in the Labour Act, Chapter 297, Revised Edition 2011.
Subsequently, on July 15th, 2020, the PBL wrote advising that the redundancies would take effect on July 22nd, 2020 and provided a list of 36 workers that the company planned to make redundant. Once again, the Labour Department advised the PBL of the need to comply with the requirements of the Labour Act. In particular, the company’s attention has repeatedly been brought to Section 45 (3) of the Act, which outlines the requirements, processes and protocols that must be followed. Even though any employer has the prerogative to make a redundancy decision, a key requirement is that of due process under the law. The role of the Labour Department in the implementation of redundancies is to ensure that the law is followed and that workers receive due notice.
The Labour Department continues to request the PBL’s compliance with the provisions of the Labour Act.”