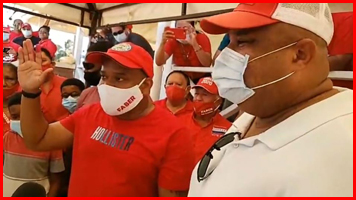 -UDP elects New Party Leader
The United Democratic Party held a convention on Sunday, July 12 during which a new party leader was elected. In a low key event at the ITVET compound on Freetown Road in Belize City, 569 delegates got the opportunity to make it to the polls and cast their vote for either of three contestants.
In the end, Hon. Patrick Faber received 286 votes, Hon. John Saldivar received 267 votes and Hon. Wilfred Elrington received 10 votes. Two delegates did not vote and four ballots were rejected.
UDP Party Chairman, Hon. Sen. Michael Peyrefitte explained that the election was cordial and respectful and noted that, “we are one UDP” and whoever won would be followed by the others. “Now that we have a rudder going forward, it’s all about making sure that we stamp our seal on this election that’s coming in November under the vision and the style of the New Party Leader-Elect.” “There is no ‘Team Faber’ and no ‘Team Saldivar’, just ‘Team UDP’, stated Peyrefitte.
After being sworn in as Party Leader-elect, Hon. Faber explained that it has been his life’s ambition to be the leader of the party and what will make it complete is for him to offer himself as Prime Minister. He noted that his success would not been possible without others. He thanked the standard bearers, ministers and delegates and those who gave him their support this time around. He also thanked Hon. John Saldivar as they have a longstanding friendship and rivalry given their ambitions. Hon. Faber stated that now that the convention is over and while there may be some issues, “We will work it out and when elections come, we will be ready!” As it relates to my colleagues, I will make every effort possible to sit with them and to talk with them and to try to see if we can work together forward,” said the new leader.