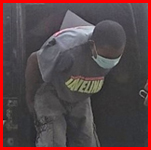 Kenroy Gomez has been fined after appearing in court on a charge of theft. He went to shop at 88 Shopping Center on Central American Boulevard on Thursday, June 18 when he was found with three pounds of pork chops in his pockets. The report is that he had left a chicken on the counter, unpaid for, and when the store’s security searched him, they found the chops in his pocket.
In court, Gomez refuted the claim that he had the pork chops in his pocket and explained that he had money to pay for them but temporarily lost focus. He says that he finds himself facing a number of financial hardships and other challenges at home and considering all the stress he is facing, was just preoccupied and forgot to pay for the meat. He pleaded not guilty to the charge of theft and considering that this is Gomez’s first criminal offense, was imposed a fine instead of a custodial sentence. He was warned, however, that if he appears before the court on another offense, he will face jail time.