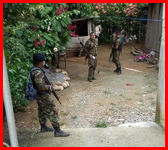 Commander of the Belize Defence Force, General Steven Ortega has publicized that communication has been sent to the Organization of American States to determine whether or not Belizean soldiers had illegally entered into Guatemalan territory.
The request came after photographs and allegations were made on a Guatemalan news outlet Red 17 Peten Noticias, that Belizean soldiers had entered Guatemalan territory and were ‘illegally measuring lands’ in the neighboring village of Santa Cruz. Based on our investigations, Santa Cruz is a village that is largely in Guatemala but a part of it is also in Belizean territory. The soldiers were on routine patrol on the Belizean side of the border. The village is near the BDF’s Tree Tops observation point and has a road that winds its way in and out of Belizean territory. The soldiers were on patrol on the portion of the road that makes its way in and out of Belize. As is routine, BDF soldier have always maintained a presence in the area and this is the very area where the photographs were taken. The soldiers have also never engaged in any exercise to measure or demarcate any land and particularly any that is so close to the border.
It is noteworthy that Guatemalan news outlets are often incendiary when reporting on matters between Belize and Guatemala.
Assistance has now been sought from the OAS and the Ministry of Foreign Affairs to settle the matter.