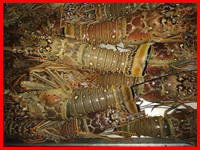 The lobster season in Belize opened on June 15 and generally, it would be a time for the annual Lobster Fest in Caye Caulker, Placencia, and San Pedro and other excitement. Fishermen, those who fish for lobster especially, would be getting ready to make a great haul, selling their product for about $31 to $34 for the pound. Unfortunately, however, they cannot look forward to that amount this year. Because of low product demand and difficulties with exporting the commodity brought on by COVID-19, the Belize Fishermen Cooperatives and other wholesale buyers are simply not offering this price for lobsters. The price being offered has gone down by more than half, to around $15, or just over half, around $19, per pound. This has caused a great disturbance among fishermen who are saying that they simply cannot afford to sell their product for that meager amount.
Fishermen from Sarteneja, Belize City and Caye Caulker met to discuss the issue. Their concern and disappointment were visible on their faces and some of the fishermen vocalized their issues with the changes in price, a very significant decrease from last year. Considering their expenses incurred in catching the lobster, $15 a pound is simply not profitable nor is it operational.
Collectively, the group attempted to arrive to a feasible solution. One person suggested holding on to their product if the co-op would refuse to increase their buying prices, but for fishermen with larger quantities, this is simply not a viable possibility. On average, a fisherman with a larger operational capacity can trap over 100 pounds of lobster on a daily basis. To yield the greatest profit, they must sell these lobsters for the maximum price and cannot allow for any spoilage. That is why for these fishermen with large quantities, it is not possible to simply withhold their product. One fisherman, in an attempt to be a voice of reason, encouraged the men to possibly negotiate with buyers to at least pay for their costs of operation. This included skiff and machinery, lobster traps, food, and the like.
It will be a long road for the fishermen and buyers of their product and with the lobster season already a few days in, they must arrive at a solution quickly. Beverly Wade, Director of Fisheries, Belize Fisheries Department, commented on the issues and the fishermen’s concerns. Considering that we are in a depressed global market, the demand for lobsters and other luxury commodities are simply not there. The product is mostly exported to the United States of America (USA), countries in the European Union (EU), and countries in Asia. Because so many of those countries’ economies are depressed and in recession due to COVID-19’s impact, they are not currently importing lobster. It is not until there are economic recoveries in these markets that the market demand will increase and local fishermen can expect higher prices for their product. Wade says that it is realistic and that the Belize Fisheries Department is hopeful that that may be a possibility before the end of this lobster season, which ends in February 2021. Likewise, when the conch season reopens in October of this year, there may be recoveries in our local fisheries sector, which we must be grateful is still operational. Importantly, Wade says that fishermen can still expect a profit during this current problem although it might be as large a margin of profit as normal.