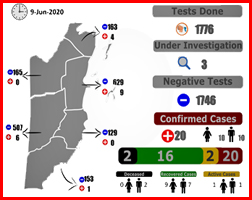 In Belize, the number of positive cases of COVID-19 remain fairly low, especially when compared to our regional neighbors. We managed to go a whopping 53 days without recording a positive case and at that time, our numbers stood at sixteen recoveries and two fatalities. During that time, several restrictions under the nationwide State of Emergency (SOE) were lessened and the repatriation of Belizeans began. The first group of repatriated Belizeans landed in country on May 23 from off the Rhapsody of the Sea, a ship from the Royal Caribbean’s fleet. Since landing in country, they were all placed in mandatory quarantine at the Radisson Fort George Hotel and samples were taken from them on their 13th day back in the country. If everything had been okay, they would have been released on day fourteen.
One person from the group, however, tested positive for the novel coronavirus on day thirteen. Director of Health Services (DHS), Dr. Marvin Manzanero, indicated that the 27-year-old male is asymptomatic. The Ministry of Health (MOH) is undergoing contact tracing of person with whom the infected individual may have come in contact.
Case #19’s positive result took many Belizeans by surprise since the passengers were said to be isolated at sea for over two months. While on the sea, their temperatures were taken twice daily on the ship and persons who displayed any signs of respiratory illness or common cold were screened and tested. Dr. Manzanero explained that cross contamination may be the reason for the positive case of COVID-19 since there were different times that the ten persons boarded the ship and some came from off different ships.
Apart from case #19, the other nine persons were allowed to go home but must stay in self-isolation. Later this week, subsequent tests are expected to be done on all ten persons to determine their health status.
Just a few days later, on Tuesday, June 9, 2020, a 20th positive case was confirmed by the MOH via a press release. This time, a 22-year-old female travelling along with a one-year-old child and 63-year-old woman was caught crossing illegally into Punta Gorda Town of the Toledo District on Sunday, June 6, 2020. While the woman did appear asymptomatic, newly revised protocols which recently came into effect states that persons entering Belize, whether legally or illegally, are to be swabbed and tested. It is for this reason that they were swabbed and a 20th positive case was recorded in Belize. The trio has been placed in a mandatory quarantine facility in the town. Contact tracing for patient #20 is underway.
The Ministry of Health takes this opportunity to remind and urge the public to adhere to MOH protocols and to continue to exercise prevention methods at all times.