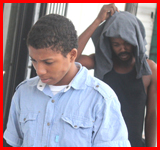 It appeared to be a clear cut case of murder when an 18-year-old was allegedly hired to a hit to kill 29-year-old Mark Anthony Jones. This murder took place on February 2, 2017 when police were able to arrest the gunman, Diandre Duvual Adolphus, and his accomplice, 31-year-old Bruce Clinton Reneau. Jones was inside his yard on Pelican Street Extension when he was shot twice to the chest and succumbed to his injuries less than thirty minutes later. Police arrested Adolphus and he was charged for murder while Reneau was charged with abetment to commit murder since the police say that he provided Adolphus with the firearm.
The duo was linked to the crime based on a statement given by a resident of Belize City, Frederick Smith. He has since passed but in his 2017 statement, he details a conversation between Adolphus and Reneau prior to the murder. He says that Reneau called Adolphus over to his house where he asked him if he was ready to commit the crime. Adolphus said yes and, according to Smith, that is when Reneau instructed him to change his clothing and handed a 9mm pistol to him. Adolphus then walked out of the house and put the gun inside the waist of his pants and headed to the direction of Jones’s home where two gunshots were heard by Smith some twenty-minutes later.
Since 2017, Adolphus, now 22, and Reneau, now 33, were remanded but are now free men after the prosecution’s case fell apart. On Monday, June 22, the Office if the Director of Public Prosecution entered a case of nolle prosequi against them. Prosecutor in this case was Senior Crown Counsel Shanice Lovell who did not offer a reason for the submission.