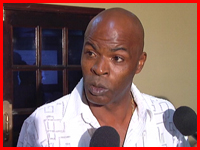 Area Representative for Port Loyola, Hon. Anthony ‘Boots’ Martinez has expressed interest in running in the Pickstock division. The four-time area representative had announced earlier that he would be retiring from politics at the end of this term; however, circumstances have since changed with Hon. Wilfred ‘Sedi’ Elrington making the announcement that he would not run in Pickstock. That left the seat wanting for representation and Minister Martinez has since began to canvas the area.
Since his arrival in the division, it has caused major consternation within the People’s United Party, as the Anthony Mahler camp has become noticeably agitated. They had thought that the division would have been an easy win, but with Boots’s arrival, the camp is trembling. The seasoned politician has already hit the ground and earlier this week there was even a confrontation with Mahler’s hangers-on in the Victoria Street area of Pickstock. Not one to back down, Boots braced them and by the end of it all they had all left scampering. Notable figures in the area even began to curse them out for never having had an interest more than giving them $5 dollars now and again. Boots on the other hand is not just about promises; he’s already begun to deliver.
He has also had meetings with UDP faithful in the division and his arrival is most welcomed in the area.
No official announcement has been made by the party on who will replace Hon. Elrington but if we were a betting lot, we’d say Boots is already ahead of the game.