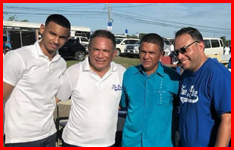 When someone else’s safety and acceptance is on the line, your personal discomfort comes in a very distant second. –Courtney Milan
It is a sad but often hidden fact, that in the year 2020 there are still bigots living amongst us. This week when the Sand Hill Village Council made it known that they would be resisting the government’s decision to issue much needed parcels of land to first-time land owners from the Mesopotamia Constituency in Belize City, or outsiders as Darren Leal who is the Chairman of the San Hill Village Council calls them, it brought bigotry into sharp focus.
Besides being the San Hill Village Council’ Chairman, Leal is also the son of the P.U.P’s Belize Rural North standard-bearer, who is the man who is trying to become the Area Representative for the people of Sand Hill and the entire Belize Rural North. It is a well-known fact that people are not born as bigots, bigotry is taught to them, so who was Darren Leal’s teacher?
The chairman is not the only one to put on display his obvious bigotry. Rodwell Guerra, Councillor with the Sand Hill Village Council also did so when in a News 5 interview he said “when you are from the village, you have a different lifestyle. We are more together. We hail our neighbours. And if first of all that is not your intention, I believe that is not the place for you. Whoever is moving there, if you are not willing to adapt to the changes, then it is best not to go…but we are also trying to keep safety within the community…”
Must we have to inform the Sand Hill Village Council that Mesopotamians’ lives matter? Do we need to remind them that Mesopotamia is a part of Belize or that the Sand Hill Village Council does not own our national lands? The first-time landowners have been waiting for two years to fulfil the dream of owning a piece of land. Over the last two years, Shyne Barrow and the first-time landowners from Mesopotamia have put in a lot of time, energy and even more importantly their money to make the dream become a reality. Many of the first-time landowners had to struggle to come up with their portion of the money needed to survey the area to enable the subdivision.
The often controversial Nigel Petillo, who is no fan of Shyne Barrow and or the UDP had the following to say about the behaviour of the San Hill Village Council and their attempt to thwart the first-time Mesopotamia landowners getting a piece of land: “Well mi bredda I support anybody getting land for grassroots Belizeans… I also believe that as Belizeans we have the right to land anywhere in Belize especially if it’s available… now me lol I would squat if I haftu however in this case the area rep has negotiated on behalf of the people through the minister in the area… I can respect that too… [sic] also no land in Mesop… so now the village feels violated I can understand that too… step pon the minister why did he see it fit to allow Mesop to get land in your community if you yourselves can’t get any there… me n Shyne nuh all dat personal but I applaud the getting land for people part first time bzns… secondly if no land in the community wat are they to do? So he negotiated with the minister which turned out beneficial to the landless recipients… me nuh care if da pudp or pup made it possible my concern is that the way right people getting it… so yeah any other individual making land available/affordable for grassroots I support… try get more fi others too… n u all should try assisting or pressuring your ministers/area reps bout doing the same!”
We checked and it is not only the people of Mesopotamia who will be the recipients of land in the area, so will residents of Sand Hill and other constituencies in Belize City. These first-time landowners are poor hard-working people, many of whom are single mothers. They have assured us that they are prepared to get on buses to go and protest in Sand Hill to stand up against the bullies who are trying to snatch their dreams away. They also assure us that they will have the support of hundreds of other Belizean who are willing to stand with them because bigotry will not be allowed to win.