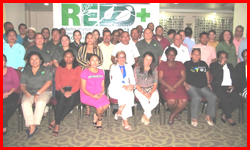 In 2019 as in the region, Belizeans met frequently in training programs to explore ways to mitigate the impacts of Climate Change. While this has been happening, the evidence for Climate Change has been mounting.
“The drought will continue,” said Belize’s Chief Meteorologist Catherine Cumberbatch on Monday. According to the National Meteorological Service, rainfall across the country during the period March – April – May 2020 (MAM 2020) is expected to near normal in the south and slightly below normal over central and northern areas. Maximum/daytime and minimum/nighttime temperatures are expected to be above average during this period.
Latest data indicate that short-term drought is possible over Cayo and Stann Creek districts. Therefore, these districts are under a short-term drought watch. Meanwhile, the short-term (Meteorological and Agricultural) drought has ended for most other parts of the country.
However, there is high uncertainty and very low confidence in the rainfall predictions for the next few months due to the current and predicted neutral El Nino Southern Oscillation (ENSO) phase.
The current long-term drought outlook shows that long-term drought is evolving over most districts with the possibility of it extending as far south as the Toledo district by the end of the 2020 dry season. Rainfall totals in the rainy season of 2019 was well below normal and the rainfall expected for the next couple of months will likely not be enough to replenish the ground water before the onset of the more intense part of the dry season (February to April).
Much work took place in 2019 to prepare us for the climate in 2020. But the current data indicates that such work needs to continue in earnest.
Before his departure from the Caribbean Climate Change Center in Belmopan CCCCC, Dr. Kenrick Leslie told the Guardian that “…Climate Change is here.” Thus; the soon to be completed headquarters of the National Emergency Management Organization NEMO in San Ignacio has been designed considering Climate Change. Also, the soon to be launched Coastal Road and Caracol Road Projects in the Belize and Cayo District, respectively, will be built taking into account the effects of Climate Change.
The REDD Plus team met in San Ignacio in 2019 an attempt to gather data on Belize’s total forest cover and its contribution to climate change mitigation. Also, in 2019 experts visited the Headquarters of the Ministry of Agriculture in Belmopan to explain the tools such as Global Positioning Systems and drones that can be used by farmers to becoming climate smart.
At the Research Station in Central Farm, farmers learned ways to cope with the drought, such as the construction of water holding tanks and using the drip irrigation method. The learning of such new techniques to deal with drought is timely.
The Central American Region needs to prepare for droughts into the future. (Scientific American 2019) The main harvest of 2019 of the primary food crops of Central America—corn and beans—was completed in September, and for the fifth consecutive year, extreme weather led to a bad harvest. According to the World Food Programme, crop failures in the Central American nations of Guatemala, El Salvador, Honduras, and Nicaragua–failures primarily due to drought—are currently causing 1.4 million people to urgently need food assistance. Another major disruption to agriculture in Central America this year occurred because the summer seasonal rains were very late. Large portions of Nicaragua, Honduras, Mexico, and Guatemala received rainfall less that 80% of average for the summer, though heavy rains did affect the region in September and October, causing damaging flooding.
Human-caused climate change has strongly affected Central America in recent decades. According to the latest 2014 report from the Intergovernmental Panel on Climate Change (IPCC), the most authoritative and heavily peer-reviewed climate change report ever done, Central America became significantly hotter and drier in recent decades. Rainfall declined by about 1 mm per day during the period 1950 – 2008, and temperatures increased by 0.7 – 1.0°C (1.3 – 1.8°F) during the 40-year period that began in the mid-1970s.
The Economic Commission for Latin America and the Caribbean (ECLAC) also estimated in 2010 that Central American yields of corn, beans, and rice might fall by 10%, 29%, and 14%, respectively, by 2070—with even steeper declines by 2100.