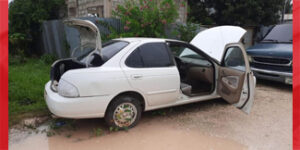 Police have detected a large amount of marijuana that was stashed in an abandoned vehicle in Belize City.
On Wednesday, July 14th, at about 7:15 a.m., police conducted a joint operation in the area of St.Martins de Porres. As a result, they conducted a search in an abandoned vehicle that was parked on Police Street. The search resulted in the discovery of 25 parcels of cannabis, which was were weighed and amounted to a total of 54lbs. No one was in the immediate area at the time and as a result, the property was sealed, labeled and deposited as found property.