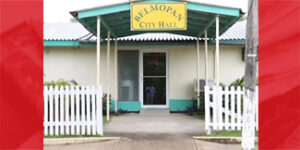 The Belmopan City Council has without warning terminated the services of 25 of its employees. Letters were unceremoniously delivered to the 25 workers merely stating that they were being placed on holiday and their services would no longer be needed effective August 2.
The entire matter came as a full surprise to the employees who received their letters on Saturday of last week when they were not even at work.
President of the Christian Workers Union, Evan ‘Mose’ Hyde, who represents the 25 employees spoke to the media claiming that both the union and workers were ambushed. He stated that the union had been in communication with the council who had informed them that they were in the process of re-engineering the council. He noted that the union was to have been given the plan on what that would mean, however that has still not been made available.
Hyde continued to state that they have sent letters to the Commissioner of Labor as well as the Belmopan City Council in which they have informed that the matter was not being handled in conformity with the labor laws. He went on to state that the council needed to appraise itself to the labor laws as it relates to redundancy.
The current PUP Council in Belmopan came to office under the slogan, “Change from the Heart,” however that is the least that is now evident from them. They have now pressed further hardships to residents of Belmopan 4 of the persons who were terminated are actually married couples which means that the entire income for two households was taken in one fell swoop. Additionally one of the persons terminated is a single mother who has a child with special needs.
It is obvious that the change is actually coming from the darkest recesses of the Mayor’s heart.