It is the norm that when countries engage in trade, for it to be legal, it needs the supervision of various authorities including customs, immigration, and in our case, the Belize Agriculture Health Authority (BAHA). For illegal trade, all that is needed is the will. And that is exactly what is taking place at the Western border point in Bullet Tree. All manner of trade is taking place there with products coming in and going out of that area without proper supervision and without the Government collecting any revenue.
Prime Minister of Belize, Johnny Briceño, confirmed that trade is taking place in the area when he made an appearance on Channel5’s Open Your Eyes on Monday, June 7. While on the show, he stated, “On November the 12thwe started exporting cattle into Guatemala. Remember when the previous government stupidly shut down the border, because of politics, we opened up immediately. So as it is right now I think in the last count we have sold about 30 thousand heads of cattle into Guatemala. We’ve been selling into Mexico, chicken and eggs, but we make sure that we have the customs, at that point, at the border point, ahm Customs, BAHA, Immigration making sure that everything is being done properly on our side of the country.” 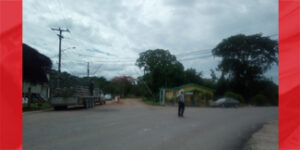 While that may be what Briceño is imagining is taking place at the border, what takes place on the ground is literally the opposite. There is absolutely no law enforcement presence on the Belizean side of the border. It is a free for all with all manner of goods leaving and entering the country. Briceño’s assertion that 30 thousand heads of cattle have been exported into Guatemala can never be verified as authorities simply have no presence at the border point and there is no official record being taken as to what is being exported. What is taking place in Bullet Tree and other informal border points is a smuggler’s dream. There is no regulation and in the instance of the cattle trade, trucks leave with live animals, which can be stuffed with anything, and the trucks re-enter, laden with uncustomed goods.
What took place a couple of weeks ago with fuel being trucked in by bowsers into Belize is the classic example of what we are talking about. There is executive sanctioning to illegal trade and that allows for anything to take place. The problem is compounded by the fact that there is an escalation of carjackings taking place where vehicles are stolen in Belize and then driven across the border into Guatemala. This activity has allowed for many Belizeans to be injured and in some instances killed by those plying the illegal trade. Again, the activity is taking place with the executive sanction and it has now been approved by no other than the Prime Minister himself.