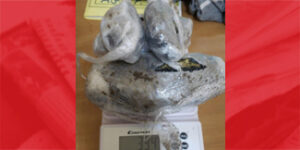 By Jem Smith
At around 1:45 p.m. on Wednesday, June 2, police officers were conducting a checkpoint in Hattieville when a Shaw passenger bus approached. The officers conducted a search on the bus and the passengers were allowed to leave the bus with their belongings. The driver and conductor remained on the bus for the duration of the search. The officers found a gray and white shirt tucked inside a compartment inside which four parcels of suspected cannabis were found. When weighed, the drugs amounted to 394 grams.
As a result, Carl Bell, driver of Blackman Eddy, and Jamil McKoy, conductor of Unitedville, were arrested and charged with possession of a controlled drug with intent to supply.