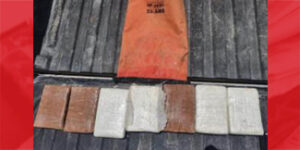 By Jem Smith
On Thursday, June 3, three men were busted with seven kilograms or just over 15 pounds of cocaine inside a truck. Police say that the men, identified as Cornelius Reddecopp, John Reddecopp, and Eric Barrera, were inside a white pickup truck on the Little Belize Road when police intercepted the vehicle. Seven parcels of cocaine were found stored inside a bag on the floor behind the passenger seat.
All three men charged for possession of controlled drug with intent to supply to another. Investigators say that it is unclear whether the drugs may have been a part of the lost cargo from a suspected narco plane that crashed off the coast of Placencia two weeks ago.