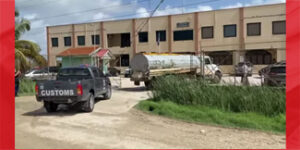 One of the old corrupt names of the PUP administration between 1998 and 2008 has resurfaced once again in blatant illegal activities. The Enforcement arm of the Customs Department conducted an operation early on Wednesday morning when they were able to intercept two 3000 gallon tankers of fuel coming into Belize illegally via the Bullet Tree border point.
The bowsers came across with their cargo valued at some 20 thousand dollars each. Reports reaching the Guardian indicate that the bowsers operate as a matter of routine, making their way into Belize City, offloading at two points, a gas station as well as a bus depot. From there the bowsers full up once again, legally in Belize City and transport fuel back to the Cayo district. Based on our information the tankers make as many as 2 trips per week with the uncustomed fuel. It is a major bust for the custom’s department which struggles to keep up with contraband goods which are flooding into the country via the informal Bullet tree crossing in and out of Guatemala.
This crossing has been normalized by the PUP administration which allows for the free flow of cattle out of Belize. While the Minister of Agriculture claims that the country benefits greatly for the informal exportation of cattle, what is not know is the volume of uncustomed items which are brought back into the country when the trucks return into Belize.
It is a large looming problem that the PUP administration has chosen to greenlight and over the past few months it has emboldened at least one PUP crony of bus fame to openly move fuel into Belize. With the price of fuel selling in Guatemala at just under 8 dollars a gallon, the fuel contrabandit is making quite a profit when the fuel is sold in Belize City at a cheaper price than what the price is officially.