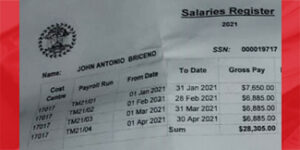 Teachers and public officers have entered into their fourth week of industrial action. They are now fully engaged in a strike and are publicly protesting. In their protesting, they are asking Government officials to be considerate and sacrifice as much as they, the public officers, will. But as much as the public officers ask, members of government are saying that they too have sacrificed.
The truth to the issue, however, is that while the Government Ministers say that they are sacrificing, that is not true. We have received information from the Smart Stream system which shows that what the ministers are giving up can be considered only a hair off a cat’s back.
We’ll take a look at two such persons, being the Prime Minister, John Briceño and Ramon ‘Monchi’ Cervantez. Both of these men have said that their allowances have been cut and in the case of Cervantez, he added that it has put an additional strain on him to help his constituents. Well both of them are liars.
The Smart Stream system shows that Briceño, at the end of January received a Gross Salary of $7,650. Thereafter his salary went down to $6,885 showing a reduction of $765 monthly or 10% of his gross salary. After Income tax that adds up to $5,580.42. That being the case, however, looking at other aspects of what he takes home, it shows quite a handsome sum. He receives $1,600 monthly in housing and entertainment allowance and that reflects no cut, contrary to what he had publicly claimed. Then there is a $1,000 in telephone allowance, again with no cut. Finally, he collects a transport allowance of $1,350 a month, and there is also no cut in this allowance. All told that’s a whopping $9,530.42 per month. For the sake of comparison, there are public officers who only collect a measly $1,000 per month.