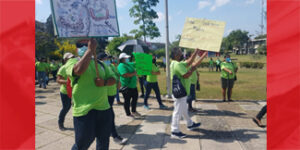 As of Monday, April 26th, the Belize National Teacher’s Union has engaged in strike action in protest of the Government of Belize’s decision to cut their salaries. They will be joined by the Public Service Union who will commence their action on May 3. The PSU had given their 21-day notice for industrial action on April 12 and that notice expires on May 3.
The BNTU has prefaced their strike action with demonstrations at the National Assembly on Thursday and Friday of last week during the budget debate. Earlier last week they took to public places carrying placards displaying their discontent with the salary cut. On Monday they ramped up their actions by demonstrating across the country in parades at the various municipalities. This was followed by more demonstrations at the National Assembly when the Senate met to discuss the budget.
BNTU members say they are prepared to maintain their strike despite the possibility of not getting paid by the government while they are on strike.