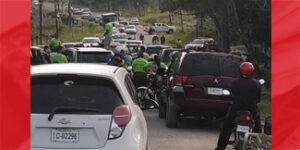 The Belize National Teachers Union and the Public Service Union have ramped up their industrial actions this week. They sent out a notice over the weekend in which they notified of the various activities that they will be engaging in over the next several days.
The first to be executed was one where vehicles experienced ‘engine and mechanical problems.’ By far the most effective form of protest, on Monday morning vehicles driven by public officers and teachers were parked on major arteries across the country with the hoods up. The participants claimed that their vehicles were experiencing mechanical problems and could not move. They did this at major highways, blocking bridges and roads, impeding the free flow of traffic on the main thoroughfares. Persons attempting to get to work on Monday morning were simply stalled and had to wait out for a couple of hours before the demonstrators decided to move their vehicles.
On Tuesday, the unionists were at it again when they had protests at various locations across the country in downtown areas. They carried placards announcing that they were not in agreement with the 10% cut which will become effective in their next salary.
On Wednesday public officers called in sick, and visited various medical facilities including hospitals and clinics claiming they were suffering from financial stress. This was in effect a sick-out as the public officers and teachers did not show up for work.
The protest actions will continue on Thursday and Friday when they will mobilize their membership to Belmopan, where they will be protesting at the National Assembly building as the budget will be debated.