Police continue their investigation of a robbery at CTN in Santa Elena over the weekend. Police have formally arrested and charge Josue Ramos 34-year-old, Belizean labourer for the crime of Robbery, and Amy Roshina Reyes 23-year-old, Belizean cashier for Conspiracy to Commit Robbery. This is as a result of a robbery that took place at CTN Santa Elena Town on Saturday.
Both pleaded not guilty and Josue Ramos was remanded to prison while Amy Reyes was offered and met bail. 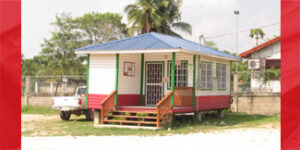 Around midday on Saturday police responded to the Cayo Television Network office on Carmen Street. Upon arrival, they met Ronisha Reyes, the cashier on duty, who told them that a man approached the cashier’s window. According to Reyes, the assailant then placed a hard object to her chest and demanded money. Ronisha Reyes handed over two cash bags containing an undisclosed amount of cash. The culprit made good his escape.