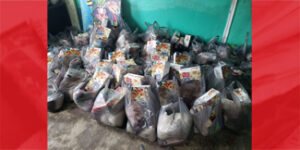 Area Representative for the Mesopotamia division in Belize City, Hon. Shyne Barrow, provided some 500 food packages to his constituents on Tuesday April 13. Shyne told The Guardian that the distribution of food items comes after he appealed to some of his family members in the U.S. for him to be able to assist his constituents in these trying times. Barrow explains that the food was distributed to those persons in his constituency who are currently unemployed.
The package includes basic commodities like rice, flour, sugar, beans, corn flakes and shortening. While it was not a large package, those we spoke with were grateful for the assistance. One resident we spoke with told us that the package will go a long way in him being able to feed his family for at least one week. “I noh di work,” he lamented and added that, “I really wah thank Shyne for this, cause I really need it.”
Shyne says that he will attempt to do this as often as he can provided he can get assistance. He appealed for those who can, to help in this endeavor. He noted that he has been referring his constituents to the Ministry of Human Development for assistance only for them to return to him to say that they are unable to help.
Chloe Natasha who was one of those helping in the endeavor told The Guardian that “if we have the ability to feed the people we will continue to feed the people.” She explained that they are assisting Shyne because he has proven to be helping the people in Mesopotamia even before being elected to office.