Residents from the village of San Antonio Rio Hondo in the Orange Walk district are irate after a village sign which had been constructed and was serving as a village marker for over 12 years was simply torn down. Villagers tell the Guardian Newspaper that PUP political operatives simply took to the sign and without warning or reason simply tore it down. They say that the location of the sign was an ideal one to announce the village’s name and now there is none to replace it at the location. 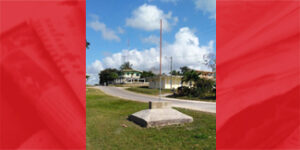 What has made villagers more incensed is that after the concrete sign was torn down, it was replaced with a pole that seems to have no real purpose.
They say that the sign was torn down by the PUP because it was erected with the assistance of the former Area Representative, Gaspar Vega.