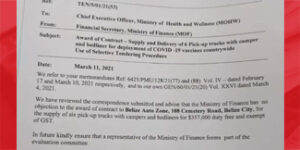 Caribbean Motors, the local authorized agent for Mazda vehicles has written a letter to the Accountant General complaining about the process by which a Bar-B-Que salesman got a contract to provide six Mazda pickup trucks to the Ministry of Health and Wellness.
In the letter dated March 12, 2021 and addressed to Contractor General, Omar Mitchell, the company states that, “We are informed that they have selected, without going to tender, Belize Auto Zone to be the supplier of six (6) Mazda pickup trucks (BT 50 Intermediate) with campers for total sum $357,000.00 or $59,500.00 each.” The letter adds that, “We wish to bring to your attention that the bid process was not utilize, therefore, in our belief, the selection of Belize Auto Zone to be supplier is in contravention of good governance practices and fair play. We wish to point out that Belize Auto Zone is not an authorized vehicle dealer. They sell small auto part, tints and BBQ on cemetery Road, Belize City, while our investment is substantial to provide after sales support.”
The letter also addresses practical issues including that they could have provided the vehicles at a cheaper price given the economic times. It adds that they are also able to provide after sales services and have the vehicles already in country avoiding the need to have the need to use of scarce foreign currency.
The discontent among car dealerships for this single transaction is looming further to another one where the contract had already been awarded and was actually reversed in favor of the Minister’s cousin. Based on memoranda dated March 4, 2021, which was provided to The Guardian, through selective tendering, Bravo Investments Limited had been chosen to provide the six pickup trucks. These were to be used for the “distribution of the COVID 19 Vaccines countrywide.”
And while that may have been the case, via a memorandum dated March 11, 2021, the entire deal was reversed. The contract was then awarded to Belize Auto Zone. There is a note that caught our attention where the same memorandum states: “in future kindly ensure that a representative of the Ministry of Finance forms part of the evaluation committee.”
The entire deal then has two major car dealerships up in arms at the way the tendering process was handled.
What is interesting is the familial relations between the Minister of Health and Wellness, Michel Chebat and one of the frontline persons of Belize Auto Zone. The two are actually cousins. It is noteworthy that immediately after taking office, Espat’s campaign coven has been handsomely rewarded with the creation of cushy jobs as reward for their roles in the campaign. It appears that this latest move is yet another one to continue rewarding those immediately surrounding the Minister of Health and Wellness.