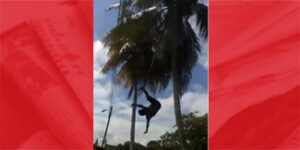 Family members have launched an appeal for Moises Valladarez after he fell from a coconut tree and sustained various injuries. Valladarez is hospitalized at the KHMH after he fell off a coconut tree in Benque Viejo del Carmen. Video footage sent to the Guardian Newspaper shows Valladarez climbing the tree on Monday afternoon.
Apparently inebriated, Valladarez first attempted to climb the tree but was unsuccessful and laid on the ground for a few moments. He made a second attempt and was successful. While in the tree, onlookers urged him to come down but he refused. It would not be too long before he fell off the tree.