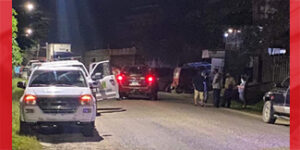 Former General Manager of the Border Management Agency at the Western Border, Gonzalo Rosado died as a result of gunshot wounds to the neck region on Monday night. Rosado was returning to his house and was about to park near his home when he was shot.
Police discovered a burgundy Nissan Pathfinder on the middle of the Highway in San Jose Succotz at about 7:03 p.m. with the engine still on. Inside the SUV was the 54-year-old, collapsed on the passenger side of the vehicle and without any signs of life.
A further investigation has revealed that Rosado was intent on going to Benque Viejo Town to pick up a female. But in doing so he picked up the woman and two other males. Neighbours report hearing gunshots and shortly after saw a female and two male persons jumping out of the vehicle and running. Police now believe that it was the same female that Gonzalo Rosado had gone to meet and is now being interviewed to ascertain if she was involved in his murder.
Rosado’s body was taken to the San Ignacio Community Hospital where the attending physician declared him dead on arrival.
A graduated of the Belize Technical College Sixth Form, Rosado was General Manager of border management from 2008 to 2020.
Incidentally, at about seven p.m. on Monday night a fire started on the right-hand side of the George Price Highway some distance away from the Benque Free Zone. Firefighter Eduard Aguirre told The Guardian that the bush fire was not a threat to the Free Zone and was extinguished in two and a half hours. Firefighters were able to create a fire pass to avoid structures from catching fire.