Beatrice Smith, 77, and her husband, both retired missioners who have relocated to Belize, were fast asleep inside their home in Teakettle, Cayo on Sunday, February 28 when armed thieves made their way into their abode. According to Smith, some three of four men breached their home and before she knew it, they had made their way into the couple’s bedroom and turned on the lights. The men then pointed guns in their faces and making demands for cash. 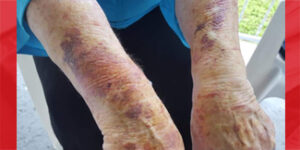 While the couple was bounded and their mouths duct taped, Smith says that she relied on faith to remain calm during the incident. The culprits proceeded to rummage through their house before accosting both Smiths and demanding monies. It is uncertain how the thieves managed to enter their property since there is a security guard on site but still, they gained access and were able to disconnect their surveillance cameras.
Police are investigating this matter and have reportedly detained two persons pending investigations into the incident.