Police officers in the village of Mango Creek find themselves in the middle of what can only be described as the theft of a grader. On Tuesday, February 16, officers acting on political instructions by PUP operatives in Mango Creek proceeded to a farm belonging to Ivan Williams, UDP Standard Bearer for Stann Creek West. Once there they broke down a fence to the farm and proceeded to hotwire a grader that was parked in the farm because it had a flat. 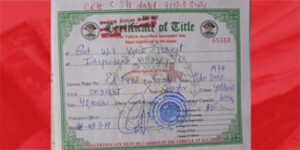 With the help of a civilian operator the grader was driven with a flat tire to the Mango Creek police station where it remains. Ivan Williams tells The Guardian that before the officers broke into the compound, he told them that the grader actually belongs to the Gut Wil View Project, a community-based organization and that all the officers needed to do was to wait on him to present the certificate of registration, which proves this fact. Despite protestations, and Williams not being present at the time, the officers went ahead and removed the grader, in effect stealing it from its rightful owner.
Williams says the project actually conducts work in the area, assisting villages with the upkeep of streets.