The life of 26-year-old Arita Vanzie of Roaring Creek was cut short after she and three others were involved in a horrific road traffic accident on Tuesday, February 9, 2021. Reports are that Vanzie was travelling inside a vehicle along with Deon Castillo, 24, Zane Zuniga, 22, and Damion Usher, 21, from Roaring Creek, Cayo to Dangriga Town, Stann Creek. At the time of the accident, Usher was driving a 2017 four-door Chevrolet Impala and when they approached Mile 3 on the Hummingbird Highway, he lost control of the vehicle. This caused the vehicle to swerve off the road, landing into a ditch and hitting a culvert in the process. 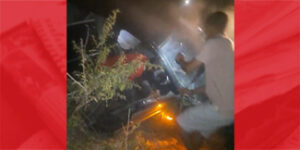 When police arrived on the scene at around 8:10 p.m., they were informed that the four occupants had already been removed from the extensively damaged vehicle and transported to the hospital. Vanzie, unfortunately, succumbed to her injuries while undergoing treatment. The other three persons were transported to the Southern Regional Hospital but it has been reported that because of the extent of some of their injuries, those badly injured would be transported to the Karl Heusner Memorial Hospital for more intensive treatment.
Details into this accident are sparse and police have not yet been able to ascertain what caused Usher to lose control of the vehicle. Their investigations continue.