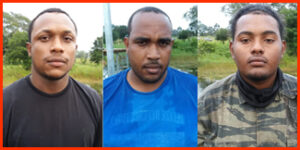 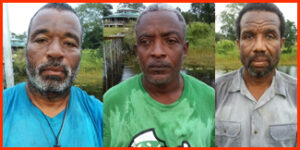 Police have arrested and charged nine men after they were found in possession of two bales of suspected cocaine. The men are identified as police officer Tyrell Talbert who was assigned to the Special Patrol unit (S.P.U.); Byron Claire, a police constable assigned to the Canine Unit, and Steve Roland, a Lance Corporal in the Belize Defense Force. They were jointly charged with Fitzgerald Claire who is Byron Claire’s father, Marlon Reyes, Edward Reneau, Garrett Banner and Dwight McFadzean.
They appeared before Senior Magistrate Merlene Moody in the Orange Walk Magistrate’s court. There they were read charges in connection with 60 kilos of cocaine which was found in their possession.
Police Commissioner Chester Williams told the media that the men were inside a boat carrying two bales of cocaine. Police had responded to an area near the Crooked Tree Lagoon where they saw a huge blaze where a drug plane was burning (see story on page 5). Williams said that, “a few minutes later they saw a boat in the lagoon heading west, the boat was moving at very high speed and so we were unable to catch that boat but minutes later another boat was seen, a smaller vessel this time was seen coming from the same direction where they had seen the plane go down, and the officers were able to take possession of a boat that was in the hill bank area and went out in the lagoon and they were able to capture the second boat, inside that boat were nine men and a search thereof yielded two bales of what we believe to be cocaine.”
Along with the cocaine police also found two shotguns and a nine-millimeter pistol which were licensed to three of the men involved. Williams says that he intends to revoke the licenses and that the policemen have been placed on interdiction.