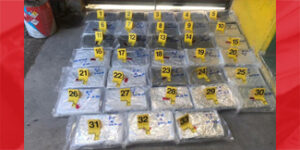 On Thursday, December 24, a joint police operation was conducted in Orange Walk District, which has led to the arrest of one of the Police Department’s own. At around 12:45 p.m., police observed 35-year-old Dion Danielo Bellini, a police constable of Belmopan, under a white Jeep vehicle that was parked on the compound of a private business. The officers approached Bellini and informed him that they would conduct a search of the vehicle. Aside from the vehicle, two suitcases from inside the vehicle were also searched. These searches yielded the discovery of 33 parcels of suspected cannabis which, when weighed, totaled 18.258 kilograms or 40.252 pounds. The constable was arrested and charged for possession of a controlled drug with intent to supply to another.