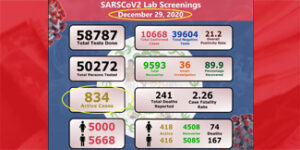 Over the last 14 days the Ministry of Health and Wellness has provided daily COVID-19 updates which has suggested that 3,323 COVID-19 cases have recovered in the last 14 days. That is a remarkable claim, and the numbers appear too good to be true. Our newsroom delved into some of the numbers to look for answers. We started by looking at the numbers for the 16th of December. On that date there were 4,832 active cases. On the following day, the 17th December, based on the Ministry of Health and Wellness’(MoHW) data, that number decreased by an astonishing 3,306 cases; going down from 4,832 to 1,526 in just one day. However, the MoHW own data only accounted for 151 recoveries and 1 death. The data also showed that there were 119 new cases on that same day, so the number of active cases should have shown an increase of 32, to bring the total to 4,864 active cases. In effect the MoHW, doctored the figures by shaving of 3,338 active cases in just one day.
The doctoring of the data has continued ever since then and now at the 29th of December, the MoHW’s data shows Belize as having only 832 active cases, meaning that Belize’s active cases dropped by an astounding 3323, in just 14 days. Those numbers just don’t add up when using the MoHW’s own daily statistics. A closer look at the MoHW’s daily statistics shows that from the 17th of December to the 29, they accounted for 1,160 new cases; 1,805 recoveries and 30 deaths. When the new cases are added to the total number of active cases shown on the 16th of December, then the total number of recoveries and death from the 17th to 29th December subtracted, that should leave 4,167, which is what our active cases should be and not the 834 active cases that the Ministry of Health and Wellness is claiming. Their statistics is simply not accounting for 3323 cases.
We have checked with technical persons from within the MoHW, who have suggested, that the reason why the numbers may be falling so fast is, because of the adoption of a new policy whereby after 14-15 days, Covid-19 positive persons are not being classified as contagious or capable of infecting others. They are now being automatically categorized as having recovered as soon as the positive person clears 14-15 days. Those same sources have informed us that there is evidence which shows that positive persons are averaging 28-35 days, and in some cases 40+ days of still being infected. Even if we were to take the MoHW’s data at face value, then since the MoHW is only claiming that there are only 834 active cases, it would mean that the MoHW is claiming that 326 of the 1,160 persons who tested positive over the last 14 days, miraculously recovered in less than 14 days. The question for the MoHW would then be, why were those 326 cases determined as RECOVERED, since 14 to 15 days had not lapsed since they tested positive?