Just about an hour after a disturbance broke out at the Central Prison in Hattieville on Tuesday, October 13, prison officers were able to quell the ruckus and subdue the inmates who were involved. Sometime before 10a.m. on that day, prisoners held a male and female prison officer hostage. During the ordeal they were beaten by the prisoners with the female officer receiving a number of injuries. The other officer received multiple injuries to the head as well as a broken nose.
As officers attempted to regain control of the prisoners at Tango 7 or the Administrative Segregation (Ad-Seg) section of the prison, shots were fired during which two prisoners were injured. Their injuries were described as not life threatening but one of those injured, identified as Stephan Jenkins, died as a result of a gunshot he received to his buttock. The other prisoner was shot to the ankle.
Jenkins was serving a 17-year sentence after he pleaded guilty to the lesser charge or manslaughter in the killing of 51-year-old security guard, Dennis Williams. He was killed while his workplace, Three Star Chicken on Vernon Street was robbed.
Prison CEO, Virgilio Murillo explained that the inmates at Tango 7 are some of the more violent and disruptive in the prison. He explained that, “it’s only a few of them. It’s less than 100 and I cannot have them hold the prison for ransom, I have a population of less than 1,200 right now how do you reckon with having less than 100 prisoners try to assert themselves and run the prison, we need to maintain order and discipline that is what prisons are all about.” 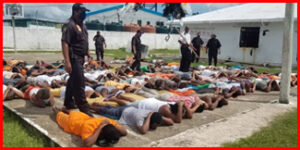 Tango 7 is the very section where just a few hours earlier a mass prison break out took place with 28 prisoners getting away. Murillo explained that the disturbance at the prison is likely as a result of a 21-day lockdown, which the prison has been put under due to Covid-19. According to Murillo, there was no indication that the inmates would have reacted violently to the lockdown, nonetheless the prison will proceed with it. He noted that, “the people who are trying to kick up a storm, if you look at their history, their conduct in prison, these are people who keep giving the prison trouble. They are either violent, they are disruptive, they are assaultive and we can’t have that in prison. I’m sorry, they are here to be discipline and we are going to do what we have to do to show them that we are in charge.”
Supporting the CEO in the decision was Commissioner of Police, Chester Williams who explained that even though the police department’s resources are spread thin as a result of Covid-19, he will always respond to requests for assistance from the prison.