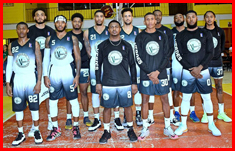 By Karim Juan, NEBL Commissioner
Monday, February 24, 2020. After key matchups this past weekend, the National Elite Basketball League (NEBL) is bouncing into Week Seven, which is the mid-way point of the regular season with teams establishing greater chemistry. All scores, standings, schedule and player stats can be found on our website at neblbelize.com All games can also be followed live online on our webpage by clicking on the game at the top of the website. When fans click on the game the live stats for that game will be accessible.
Benny’s Belize Hurricanes bounced Bandits in Belmopan
Belmopan Bandits hosted Benny’s Belize Hurricanes on Friday night at the Hilltop Basketball Court in Belmopan. Bandits jumped out to an early 22 – 12 lead at the end of the first quarter, which they extended to 17 points mid-way through the second quarter, going into intermission with a 42 – 34 lead. Hurricanes went on a 33 – 18 run in the third quarter to take a seven point lead going into the final quarter of the game. Despite Belmopan narrowing the gap to 5 points in the fourth, the visiting squad was able to hold on the lead to seal the 89 – 83 victory. Benny’s Belize Hurricanes was led by new comer Dominic Shuler who tallied 23 points, 9 rebounds and 3 steals while Jamal Kelly recorded his season high with 22 points, 4 assists, 3 caroms and 3 dimes. Jamell Harris finished the night with 18 points and 9 rebounds while Glency Lopez had 10 points in his season debut. Khalil Jabbie was the top scorer in a losing effort, netting 30 points to go with 11 assists and 5 rebounds while Jevaughn McKenzie scored 18 points and grabbed 6 rebounds. Richard Smith III sank 17 points and grabbed 9 rebounds while Brandon Rodgers chipped in 11 points.
Verdes remains undefeated at home
On Saturday night, Verdes hosted Griga Dream Ballers at the Sacred Heart College auditorium. Dangriga jumped out to a good start, taking an 18 – 17 lead at the end of the first quarter. Verdes was then able to hold Griga to only 11 second quarter points to take a 38 – 29 lead going into the half. The game was a see-saw affair in the third quarter as Griga was able to cut the deficit to only 2 points, trailing 49 – 47 going into the fourth quarter. Mid way through the third quarter Verdes was able to pull away to grab their third consecutive home victory, 69 – 54. With the win, Verdes and Defenders are the only two teams with a loss, which Griga Dream Ballers dropped to a surprising 1 – 4 record. Verdes was led by last year’s MVP, Kris Frazier who tallied another double-double with 22 points and 14 rebounds while Tyrone Hall and Richard Troyer chipped in with 12 points apiece. Howard Arzu was the top scorer for Griga Dream Ballers with 15 points and 5 rebounds while Edgar Mitchell tallied 13 points, 5 boards and 3 assists and Delvon Henderson posted a double-double with 12 points and 13 rebounds.
Orange Walk Running Rebels wins 2 straight, a first time franchise history
Punta Gorda Panthers traveled up north on Saturday night to take on Orange Walk Running Rebels in an attempt to stop their 3 game losing streak while the home squad was looking for their first 2 game winning streak in franchise history. The game was evenly contested with a 19 – 19 tie at the end of the first quarter, after which Punta Gorda Panthers had a 42 – 36 at intermission. In the third quarter, Orange Walk Running Rebels regained the lead, 77 – 75 going into the fourth quarter. In the fourth quarter, the home squad was able to maintain the lead and secure the 88 – 81 victory. Isaiah Thomas was the top scorer for Orange Walk Running Rebels with 17 points to go with 7 assists while Brian While tallied another double-double with 16 points and 12 rebounds. Roger Reneau posted 14 points and 4 dimes while Dajuan Cooper and Tyrie Orosco sank 12 and 11 points respectively. Punta Gorda Panthers was led by Jevonte Hughes who had the game high 25 points to go with 7 boards while D’Von Campbell finished with 17 points and 5 assists. With the win Orange Walk Running Rebels have won two consecutive games for the first time in their franchise’s history while PG Panthers is now reeling on a 4 game losing skid.
Upcoming Games
Friday, February 28 at 8:45 p.m. – Digi Belize City Defenders vs. Orange Walk Running Rebels at Belize Civic Centre